Community Service and Exploring in Portland

Helping those in need and giving back during the holiday season provides a powerful experience for Dragonfly students. Last week students visited Portland to do community service, volunteer with nonprofits, and broaden horizons by exploring the unique cultural activities and group bonding opportunities that the city has to offer. Here are some highlights from the trip as shared by students and trip leaders. 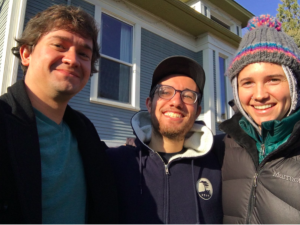 We kick off one morning with our Alberta Arts District Beautification project. The team walked all up and down the district with trash bags picking up any and all litter strewn about. It felt good to give back in such a direct way to the very part of town that was housing us. After cleaning up the neighborhood a bit, we had lunch together at Rice Junkies, a tasty Asian restaurant a few blocks down from the house, and then went to laser tag! which was super fun. 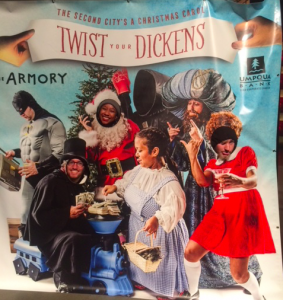 After three rowdy rounds of lasers, we headed back to the house to have dinner together before meeting the other Dragonfly houses downtown to see the play Twist your Dickens, an interactive parody and a hilariously unique take on the Dickens classic “A Christmas Carol.” The play was amazing and laughs were had by all.

Portland was just as we expected- super hip with swaths of art painted upon city wall after wall. Spirits were high as we walked up to the mecca of foodcarts, and we laughed at how every truck was the “number one” provider of food X. 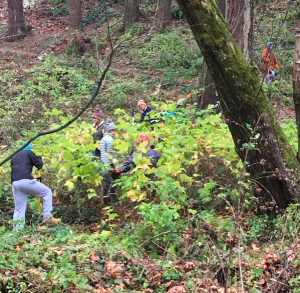 On one morning of the trip we met up with a woman from the Parks and Rec Department and worked for several hours to remove invasive species from a small outdoor area called the Rosemont Bluff.

Other groups volunteered to clear the outside grounds around the Pittock  Mansion, which was built by the owner of the Oregonian Newspaper Henry Pittock. 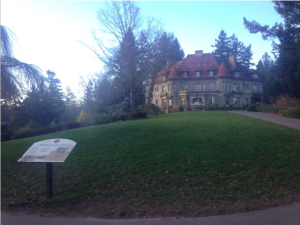 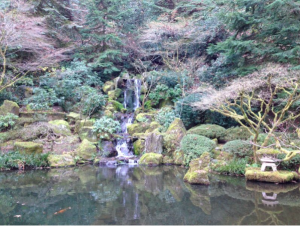 The Portland Japanese Garden, as we learned, is apparently the second best Japanese garden in the world. Second only to one in Japan! Not too shabby. It was incredibly beautiful and tranquil. I could have spent hours there! 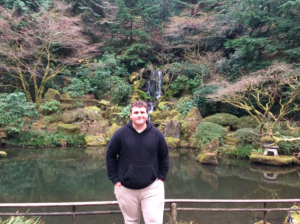 After lunch we went to Powell’s, the city of books. Powell’s did not disappoint. After spending an hour at the famous city of books, the crew was pretty tuckered out so we headed back to the house for some R&R and to experience Salt & Straw, Portland’s own exotic ice cream shop. Salt & Straw is a truly unique dining experience. Flavors include (but are certainly not limited to) gingerbread cookie dough, pear and blue cheese, peppermint cocoa, strawberry balsamic with black pepper, sweet potato casserole with maple syrup, and apple brandy with pecan pie. 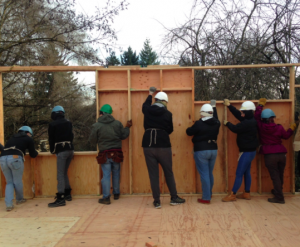 The next day started early again with the team heading out to a build site for Habitat for Humanity.  The team spent 8 hours swinging hammers!  Half of the team worked on building walls for one set of town houses and they worked side by side one of the future owners of the home.  The other half of the team built stairs and blocked walls. 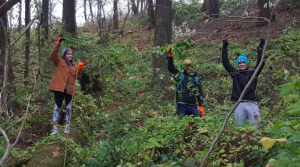 Our trip in Portland was great! It was a little cold but we all planned accordingly. It was really nice to see the group come together when it was time to volunteer. 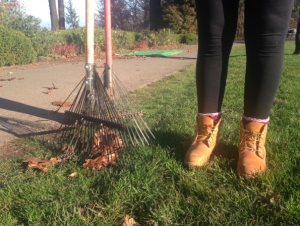 Our group went to Crystal Springs Park and helped spread 40 yards of mulch and then 20 yards of gravel. Although this was hard work and tiring, our group did a great job working together and helping each other! We created a system and the more we worked the faster we got. After 4 hours of hard work we all felt very accomplished and a little closer to each other. 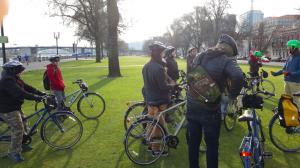 Throughout the week students also volunteered at Marquam Nature Park and Restore Terwilliger. Additionally, we explored the city with a 6 mile Pedal Bike food cart tour, visited the Oregon Museum of Science and Industry (OMSI), and broadened our culinary horizons by trying such things as peanut butter and jelly fries (they were actually really good!) as well as cornbread and honey butter ice cream. Overall the trip was amazing and lots of fun. We volunteered to help the community and enjoyed ourselves!

Dragonfly Transitions serves young adults ages 18-30 in three locations in Southern Oregon – Klamath Falls, Ashland, and the Homestead. Students learn life skills and work to transition into healthy young adult living with independence, autonomy, integrity and sustainability. Dragonfly provides opportunities for real world experience in a stable, supportive environment where students can flourish. The Klamath Falls campus has a coffee shop and deli, A Leap of Taste, for job skills. The Homestead has a working farm with a greenhouse and animals. Ashland is home to the Oregon Shakespeare Festival. All campuses have a variety of vocational and educational options.