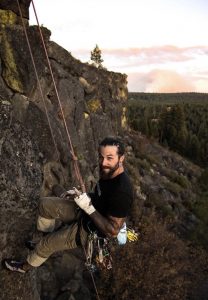 Winston was born and raised in Klamath Falls before he left the area to play collegiate basketball. Two years into college, Winston suffered a back injury that redirected his life and ended his basketball career. After spending a few years between Salem, OR and Seattle, WA, Winston moved back to the place he has always called home. Hardship and personal challenge have landed Winston in a special place in life where he feels that he can offer the positivity and relational approach needed to be an effective mentor. Winston currently works as a night mentor at the Homestead. In his free time he enjoys mountain running, alpine climbing, everything else outdoors, and riding his bicycle as much as he can.