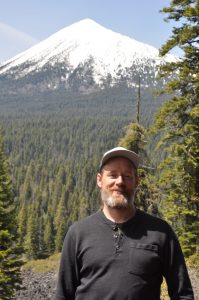 Born and raised in Ohio, Mark moved to Oregon and enrolled at Oregon State University in 2007.  After graduating with a B.A. in History in 2011, Mark and his partner Katie travelled to the southern cone of Africa for adventure and service work.  There Mark developed his interest in organic gardening while WWOOFing in KwaZulu-Natal, South Africa.

Mark has worked as a manual laborer for 25 years.  These jobs include mowing grass, throwing hay, building carnival rides, working in many restaurants, several factories, as a driver, as a maintenance man, as a furniture mover, as an antique and then furniture delivery person, and as a general jack of all trades.  In 2011 he began working in the landscape/nursery industry, in order to develop skills for organic gardening.

A tough childhood and difficult transition into adulthood built empathy in Mark and led to his desire to make a positive impact on youth by sharing lessons learned along the way.  Mark worked with Integral Youth Services as a Summer Work Crew Leader in 2019 working on environmental projects with at-risk youth in a project funded by Oregon Youth Conservation Corps.  Mark’s belief in the efficacy of experiential education tailors with the mission of Dragonfly Transitions.

Mark’s passions include canoeing, hiking, disc golf, cooking, rock collecting and reading.  After moving to Klamath Falls in 2016 Mark began volunteering to work on the Moore Park Disc Golf Course in the spring of 2018.  Here passion and skill transformed into joy and serendipity as a longtime disc golfer realized the potential for positive transformation available through volunteer work.  Despite the daunting nature of the immense task of landscaping the woods, the work is rewarding and provides a unique connection to the community.

As an uncle of 13, Mark has always enjoyed the energy and perspectives of young people.  The ability to work with youth in a life-modeling role is a dream come true for him.  Throughout his career as a manual laborer Mark has often worked in a leadership role and has always enjoyed providing counsel for co-workers.  The exponential potential of positively impacting others, especially youth, provides Mark with hope and purpose.