10 Dragonfly students and 2 staff recently drove 4 hours north to Blue River, Oregon to raft the McKenzie River. Along the way we checked out the second tallest waterfall in Oregon, Salt Creek Falls, which has an average of 50,000 gallons of water per minute flow over the 286 ft. drop into large basalt basin and flowing out into the continuation of salt creek. 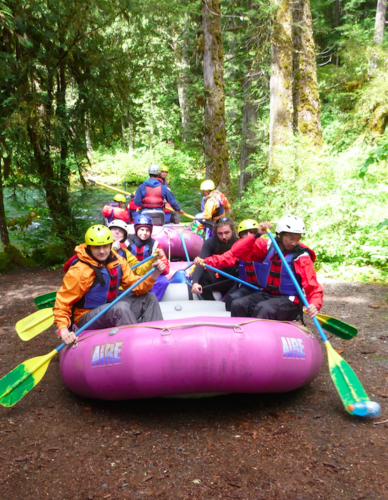 We made our home for the weekend at Delta campground which was nestled into a dense central Oregon forest next to the McKenzie River, surrounded by large trees covered in moss, thick ground covering ferns, and grass, and lots of wildlife. It felt very much like a rain forest.
On Saturday morning we prepared to take off on our first day of rafting adventures on the McKenzie River with Travis, our guide from River Stone Adventures. We grabbed our packed lunches, PFDs (Personal Floatation Devices), helmets and rain gear and went to our put-in location at Ollallie campground. We then set off rafting in two boats down to our take-out at Paradise Campground.

While out on the river we hit a few class III rapids, most notably Marten Rapid, which was the highlight of the run, and a bunch of Class II’s.  This section of river required a lot of maneuvering and it was a great time to get the crew to work together to pull off clever boat tricks such as surfing a rapids wave train. The rain had mostly subsided by the late afternoon and we were able to really enjoy our time on the river soaking up sun. 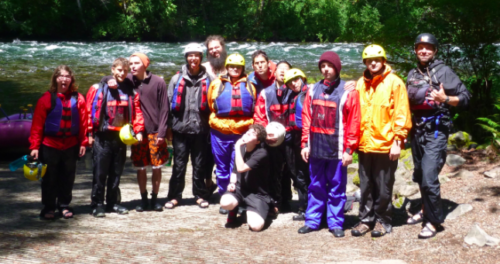 After getting off the river, we headed out and stopped at another waterfall, Sahalie Falls, which is not nearly as large as Salt Creek Falls, but it flows much more water down its short 70 ft. drop. We then headed back to camp where we got ready for a big dinner at Todakos where a number of staff and students got the famed sasquatch burger, of course named after the legendary beast that may or may not be roaming around the forests near the McKenzie River. 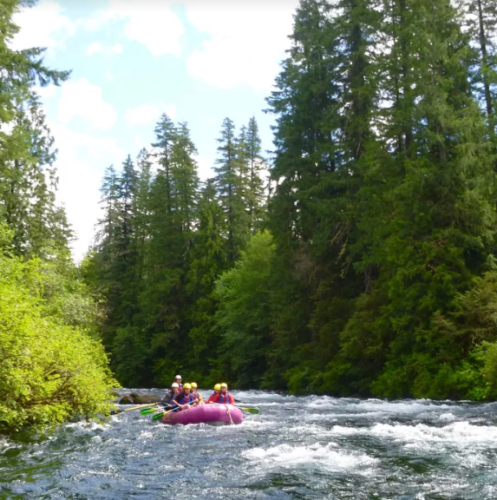 Following our hearty dinner, the crew headed out to Belknap Hot Springs resort where we soaked in the hot spring fed pool for about 1.5 hrs. and everyone was able to relax after long day of rafting and other adventures. After heading back to camp, we made a small fire and spent time carving, playing music, and enjoy our free time by the fire until our sleeping bags called us back to bed. 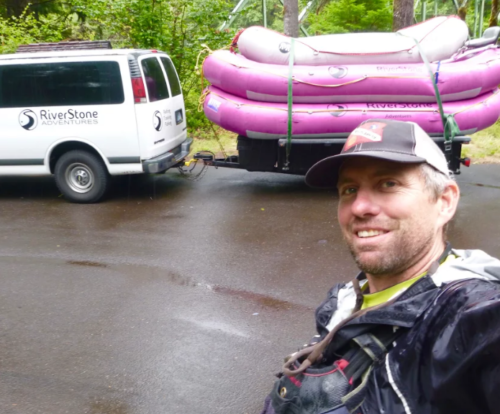 On Sunday our rafting was colder and rainier than the day before. However, we were lucky enough to get another boat, and we had a much more mellow and low key rafting day. With smaller rapids and less sunshine, a few students did take the opportunity to practice guiding under the instruction of Travis, our guide from River Stone Adventures. More mellow and relaxed sections of river provided a great option for those who wanted practice reading the river and getting the experience of captaining a boat down a river.