Composed by a different student each day of the trip. 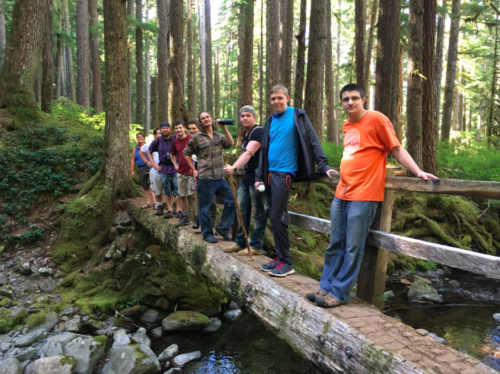 In the morning we explored Fort Stevens in NW Oregon, which was used to protect the Colombia River. After exploring for three hours we started the drive to Olympic National Park. We saw a whale on the way, but Sarah said that she didn’t get to see it because she was “driving” and “had to keep her eyes on the road.” We got to camp around 5pm to set up camp and explore the beach.

It’s not too early into our big adventure- Saturday to be precise- and already we’re off into the ever-expanding mystery that is Mother Nature. Our destination: The Forest. Or more specifically, the gaping maw of the Hoh Rainforest. Now, if you’re like me, you expect rain at a rainforest. But that’s the thing: there was no rain. No rain at a rainforest? Sheesh, I want my money back. All goofs and spoofs aside, the Hoh forest was lovely: like a balm and a warm ointment over my sensitive skin. There were verdant greens unlike any I’ve seen before. Trees taller than any tree has any right to be. Leaves, leaves everywhere. When the day’s festivities were done we piled into the van and went on back to our campsite for a hot dinner and a brisk “good night.”

We woke up on the morning of the 11th, Sunday and had pancakes and ground sausage. We also made ourselves lunches. Afterword, we piled in the van and headed to Ruby Beach. From there people spread out while we found a spot for a shelter. We got to building, only taking one break and attracting a few visitors along the way. When we finished it was named “Hobo’s Halfway.” It even had a welcome mat. Soon it became time to leave and we headed to the showers. Getting to the showers we ended up moving a little slower because there were only two. However there was hot water, which made up for it. Eventually we got back to camp and started dinner. Then we had pizza and went to bed. 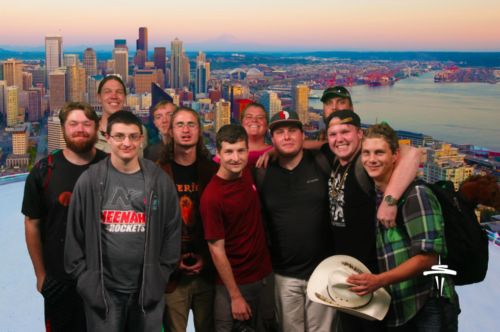 We started the day with an early wake up of 5:15am and left the campground at 6am to begin our three-hour car ride. Once we got to Seattle, we started the day touring the EMP (Electronic Music Production) Museum, which housed exhibits on Fantasy, sci-fi, horror, Star Trek, video games, wearable art, and studios to learn the basics of musical instruments. After the EMP museum, we toured the Chihuly Garden & Glass museum which was filled with a couple hundred pieces of art consisting of glass sculptures, bowls, charcoal drawings, and paintings all done by a single artist, Dale Chihuly. At 2:30pm we went to the Space Needle, where we learned about its interesting history and went to the top. After that we went on a Seattle Underground Tour where we learned the intriguing early history and founding of Seattle. We ended the day by stopping in Tacoma on the way back to the campsite for a nice seafood dinner at a restaurant called Harbor Lights. After another 3-hour drive we arrived back at the campsite and proceeded to go to sleep. The day was long and tiring but it was great! And the food was amazing!

This was a more relaxed day. We got to wake up between 9-10am. We made pancakes and sausage for breakfast. Then the group split ways and some of us went with Joe to Forks, WA to buy groceries while the rest stayed behind with Peter. When everyone got back we had a therapy group. We talked about mindfulness and consciousness. 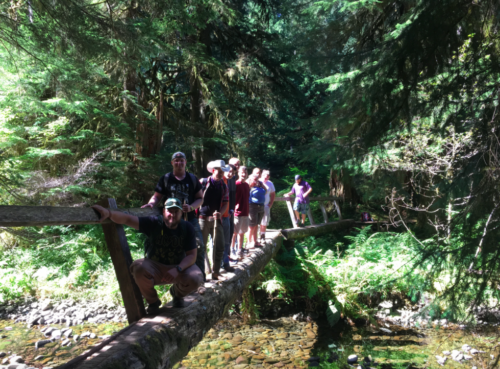 Today we went to the Sol Duc Hot Springs, as well as the Sol Duc Falls. We went to the falls first, which involved a 6-mile hike. Afterwards, those who chose to could swim in the pools built around the hot springs. The rest of the day was spent in transit, organizing supplies, and cooking, cleaning, and eating meals.

Everyone woke up at 8am. The cooks made eggs with peppers and onion, and we then departed for our 3-hour drive to the hatchery. We then met up with a man at the hatchery who gave us a tour of the process of spawning close to a quarter million fish a year. After additional questions, we loaded back into the green van we called home for an additional 3 hours back to our campsite. After a sloshy 2 hours into the ride we arrived at Forks, WA, a little town of 3,000 people, and oddly enough the setting of the best selling series Twilight. We stopped at the grocery store to snag a few essential items for the night and remainder of the trip and get some ice cream. We arrived back at the campsite at approximately 7pm and started dinner immediately. The chefs cooked hot dogs and beans over the fire. After everyone got their fill of food, we wound down and crawled into our sleeping bags, exhausted from the day’s driving.

We all woke up at 8am, looking to get out on the road at 11am after breaking down camp and getting breakfast. Everyone, doing their job efficiently, got out on the road right on time. We headed out for Portland, OR, about a 5-hour drive, making good time and only stopping a couple times. We arrived at our hotel and checked in at 6pm. After some quick showers we piled into the van for some Japanese food to celebrate a birthday. After feasting like Vikings, we went for dessert in Gresham’s restaurant park and had frozen yogurt. Bellies bursting, we rolled into the van and went back to the hotel where we enjoyed cable TV and comfy beds.

We drove back to Dragonfly!