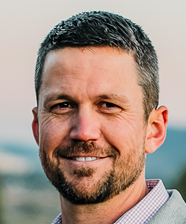 As of January 2021, Phillip Squibb, LCSW, returned to Dragonfly as the new Executive Director. Prior to Dragonfly, Phillip and his wife, Amanda, traveled the country directing and acting in children’s theater productions with Missoula Children’s Theater. He also worked for eight years as a special education teacher and a school social worker in the Chicago area. In 2012 Phillip moved with his family from the Chicago area to Klamath Falls where he worked for Dragonfly from 2012 to 2018, initially as a therapist and then as Academic Director. He then went on to the position of Director of Developmental Disabilities Services for Klamath County. In 2020, Phillip and his family spent 6 months traveling in an RV across the country. Phillip returned to Dragonfly because he believes in the mission of the program and the students we serve.

Phillip and his family are well networked in the community of Klamath Falls. He is a servant leader and embodies the core values that we hold important at Dragonfly. He understands the core of Dragonfly and what makes us unique. Outside of Dragonfly, Phillip is currently a member of the Kiwanis Club, where he works with their nonprofit to install accessible equipment in community parks. He also volunteers with Special Olympics.

In his free time, Phillip loves traveling with his family (including Rigg$, ​their dog), glamping in his RV, and he likes training and trying to compete in triathlons.