Lions, Tigers, Bears, and the Temples of Angkor (oh my!)

Thursday began with somewhat of a scramble, though not a stressful beginning considering how used to the circumstances we all are. It was time for us to move from the high standards of the Billabong hotel to another location. We had to have our bags packed and ready by 8:00. Before we left however, it was decided that we would do laundry, and many students rejoiced (I cannot confidently affirm this was true for everyone, however I do remember myself being rather elated). Once we got our laundry sorted we left and shot over to the small laundry stand(?) to drop it off. Funnily enough the Tuk Tuk that Sean took was in such a hurry to our destination that it almost forgot to stop at the laundry.

The next stop was the Phnom Tamao Wildlife Rescue Center. Right at the beginning we were swamped by sellers of fruit trying to sell us bananas and other food to feed the animals. We were later discouraged from feeding them though most of the us had figured that out. The entrance of the WRC was absolutely crawling with monkeys. They were mostly observing us and weren’t aggressively attacking us for food, though I wouldn’t be too surprised if that behavior shifted in a few years. Once we began our trek through the center, we were able to see some pretty cool sights. Not quite on the formality of a zoo but it did have a bit of the same feel. Many of the animals there were, as you have probably guessed, rescued. Some however were born there as well. Our tour guide was quite good, rather playful and personally involved with the animals.

Among the animals we saw were porcupines, otters, pythons, lions, tigers, bears (oh my), gibbons (who did a really loud screech-call), and some more elephants! The elephants we saw however looked much more dependent on humans than the ones at the EVP, sticking their trunks over the gate for food even though we clearly didn’t have any. It was kinda depressing for me (not overwhelmingly so) to see the difference.

Once we got back to the city we checked into our hotel at around 4:00, and decided to have a brief visit to the Russian market a second time, and luckily for me I remembered exactly where I wanted to go. The rest of the night was rather uneventful save for the fact that we had overpriced Mexican food (at least for Cambodia).

Another somewhat stressful wake up and beginning for our not-too exciting day; we had a late start due to tardiness and having to return to the hotel to retrieve forgotten stuff. What was our day? Around twelve hours of driving. The first set of hours we were packed in probably our most comfortable van yet, though I have some bias as I had a rather nice seat that Squibb had a similar piece of (basically we faced each other and had no seat in the row between us).

We were a bit late arriving at our destination, so the group we were scheduled to eat with weren’t there at the time. After lunch however, we met the Kravanh Bright Future Center students! The second half of our journey was spent with us put into three separate vans, MUCH more comfortable than any other arrangement we’d had so far. 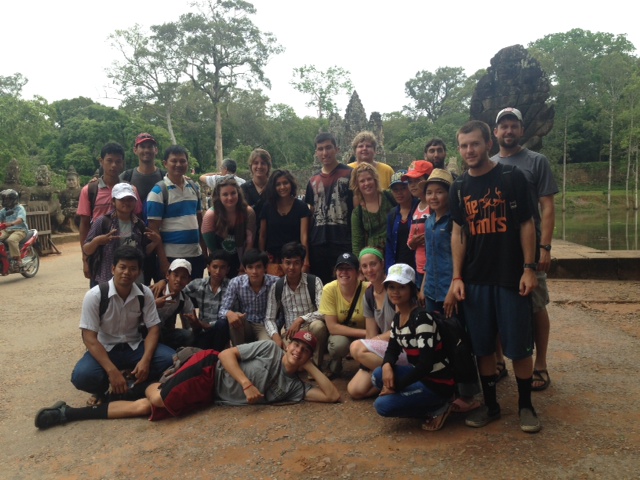 My experience may differ from others, but the ride was in a way an extended greeting, telling them about ourselves and asking them about themselves for a couple hours, and a lot of awkward and not-so-awkward friendly laughter. Eventually the chatter quieted down as we all became tired about an hour before arrival, (warranted as we arrived a time later than planned). Soon after checking in to our guest house we scurried to dinner, though some people claimed they could’ve gone without.

The restaurant we went to had the first instance of a wait that we have had on the trip! I’d forgotten that was something typical for restaurants. The city street was pretty touristy, bustling with music and stands. The restaurant in particular seemed to latch onto various pop cultures, and specifically Statler and Waldorf from the muppets. Why, I never figured out. We got back to the hotel at around 10:00 and everyone hit their beds like boulders.

We woke up in the bustling city of Siem Reap, Cambodia’s second largest city. Today, we would be exploring Anchor Wat and the surrounding temples. The morning atmosphere was filled with anticipation and excitement. We ate breakfast together as a group with our Cambodian friends and then loaded up in our three minivans. While they are called minivans they are actually vans that accommodated all twenty five of us quite comfortably. Why they call them minivans we’ll never know.

Once we arrived, we purchased our tickets and got our photos taken for our day passes. Many of us made silly faces for the camera. As we entered the Angkor Temples complex, there was a collective feeling of awe and wonder. We drove past the famous and iconic Angkor Wat to see the surrounding temples of Angkor. We saw beautiful temples with complex layouts. Our Cambodian friends were just as impressed as we were with the fabulous architecture. We saw temples that had been overgrown by trees. The stone itself was caught in the roots and trunks of massive trees. It was a very strange and unbelievable sight. It felt like the trees themselves had sprouted out of the temples and outlived the ruins. These temples had a magical feel to them. These enchanted places were surreal for many of us.

Our group ate lunch at a restaurant nearby Angkor Wat. As we approached the Angkor Wat complex it began to pour. The monsoon of rain could not inhibit our enthusiasm and energy as we began the long walk down the causeway toward the gate of the Angkor Wat. The building is intimidating to say the least it is also quite majestic. It became apparent quickly why the Angkor Wat is the largest religious building in the World. When we entered such a truly historic building a lot of us wondered about the countless people who had entered this building before us, some of them having lived over 800 years ago.

While we felt small as we explored the elaborate hallways, I noticed the quiet pride in our Khmer friends about what their ancestors were able to accomplish, what they were able to build so many years ago. This was their heritage, the jewel of their nation that they proudly display on their flag, and a treasure of human civilization. For me, I can’t describe I’m words how glad I am that I was able to share this moment with them. Seeing their eyes light up was emotional for all of us. Even the pouring rain couldn’t dampen the mood. There was so much to see and sadly not enough time. Each wall had incredibly detailed carvings depicting the Mubharata and stories from the Hindu pantheon.

As we walked back on the causeway there was a bittersweet feeling. We were all soaked to the bone and were disappointed to leave such a place. Still we felt privileged to have been given the opportunity to have seen such a magnificent place. Everyone in our group truly understood why the Angkor Wat deservingly held the coveted title “Wonder of World”.

We ate dinner in Siem Reap and returned to our hotel to dry ourselves off and prepare to leave the next day.

We packed up and prepared to leave Siem Reap. Our group ate a big breakfast and then loaded into three vans. Before we left, we saw a dam that the local Khmer people had been maintaining. The dam was currently in disrepair when we visited it. We spent the day traveling to Kravanh. We stopped on the way for lunch. We we arrived at our guesthouse and said goodbye to our Khmer friends. However, this wasn’t the last time we will be seeing them as we will be spending the week with them at KBFC. We ate dinner at KBFC and prepared for the next day of teaching and meeting the students.