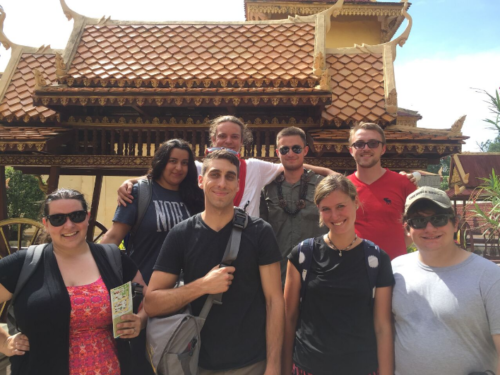 Six Dragonfly students recently embarked on a very special journey to Cambodia with a Dragonfly therapist and an experienced mentor. The trip combined service work, international travel, and cultural immersion. Among the experiences, students volunteered at an elephant refuge, taught English to Cambodian children, and visited World Heritage Site Angkor Wat. Here are some highlights from the trip written by trip leaders and students.

7/09: Cambodian Cuisine and the Royal Palace 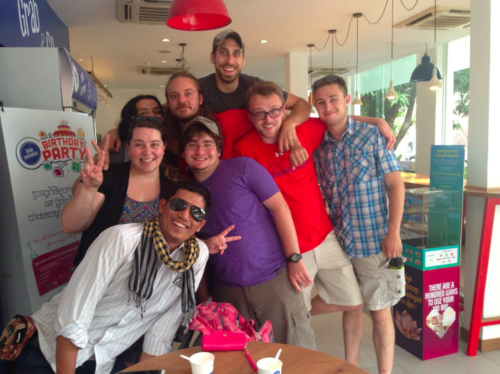 Our adventure in Phnom Penh has been very educational, fun and tasty. The royal palace was like nothing I’d ever seen before. There were rooms made entirely of silver and gold, and century old relics, hidden from Pol Pot during the Khmer Rouge. Phnom Wat, a temple in downtown Phnom Penh, was very interesting. 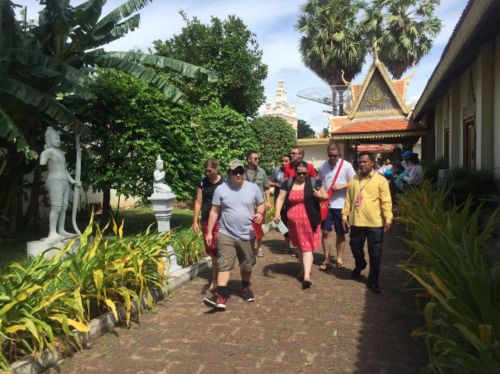 We got to see Cambodians in the act of prayer, ancient statues of Buddha, and my personal favorite, a wild monkey!

For our last day in Phnom Penh, we went to Silk Island, an island in the Mekong river where silk is harvested from silk worms and weaved into works of art. Speaking of bugs, for dinner that night, some of us ate fried tarantula, and Cory had a blended cricket milk shake. Having arachnophobia myself, I did not think it would be wise to try the tarantula, but I definitely enjoyed watching everyone else eat it!

7/10: We started the day with our Tuk Tuk driver John.  He asked if we would come to his class room and help the children practice some English.  John, like so many Cambodians works a number of jobs. 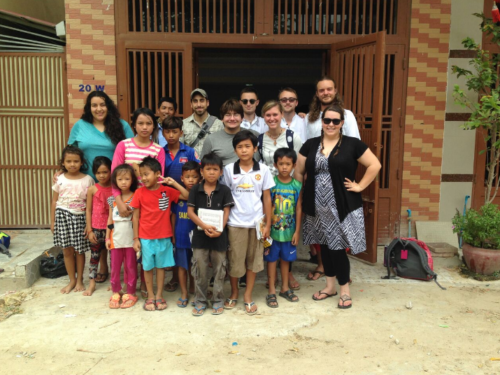 We have been lucky to have John work with Dragonfly for the previous trips for Dragonfly. He is reliable and wonderful guide, and we gladly agreed.

In the morning John took us out to a small housing area outside of the main city of Phenom Penh. 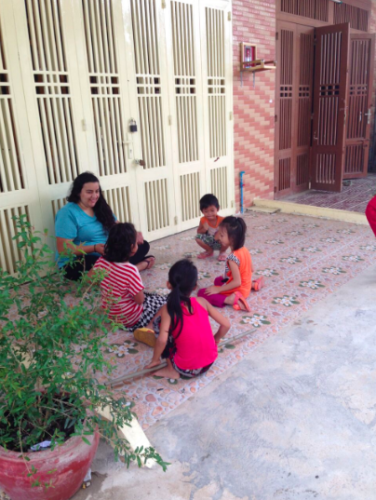 The children were hesitant at first but quickly began playing and engaging with us despite the language barrier. We practiced some scripted English with them, each taking turns with, “Hello how are you?” and a few other lines. After a couple of hours, we waived goodbye and continued to the killing fields to learn more about the history of Cambodia.

After our long day we ‘circled up’ and talked about our different experiences.  To relax and decompress after a somber day many of us jumped in the pool and a few of the guys went to spend $1 for a street shave. 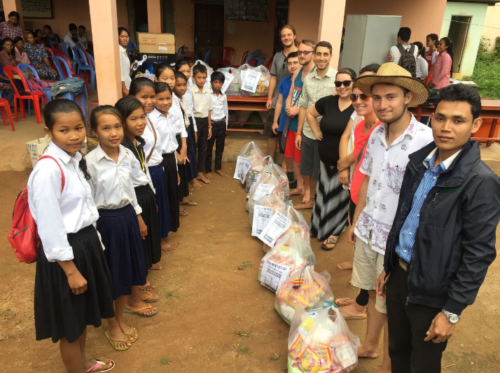 Today we left Phnom Penh to travel to Pursat (about 4.5 hours away) to meet up with our friends at Sustainable Cambodia! We were looking forward to starting the next phase of our adventure! Once arriving at the Sustainable Cambodia campus, we met with several staff members who gave us a presentation about the important work that they do throughout the Pursat province. They support students in many ways–offering supplementary classes and tutoring, providing materials and supplies, training quality teachers, awarding university scholarships and much, much more. They also offer community outreach programs, such as rice banks, sanitation and waste management education and helping people properly farm and raise animals. We also got to meet some of the students, as well as watch them dance! Some of our team danced with them! We also visited with some of the long term volunteers of Sustainable Cambodia, who spend anywhere from 3-12 months living at the campus and volunteering in a multitude of capacities. 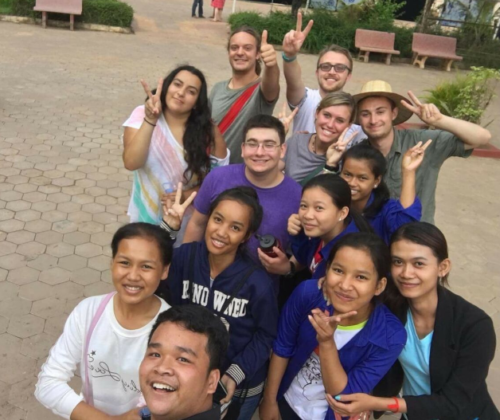 The next morning, we were so excited to meet the Cambodian students who would join us on our trip to Angkor Wat! 10 students from Kravahn Bright Future Center (KBFC), one of Sustainable Cambodia’s supplementary schools, were selected to be a part of the trip as an award for writing the best essays in English. Most of the students ranged from 16-20 years of age and are in the 10th or 11th grade. 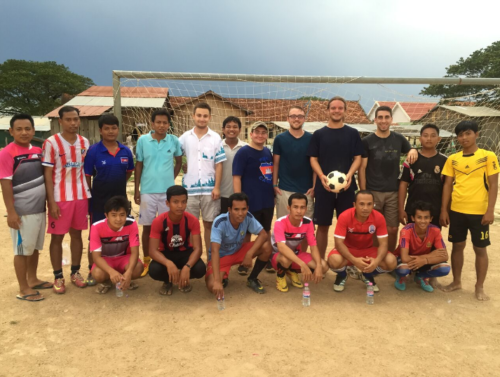 They beamed with smiles as we met and learned more about each other over breakfast. We traveled with the students by van approximately 5 hours to Siem Reap, which is where Angkor Wat is located. 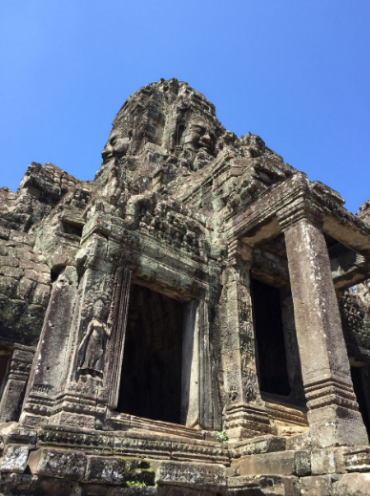 Throughout our time at Angkor Wat, we visited many temples! We were in awe of their sheer size, intricacy and beauty. We visited the Angkor Wat temple, Bayon temple, Ta Phrom temple and watched the sun set at Bakheng Mountain. 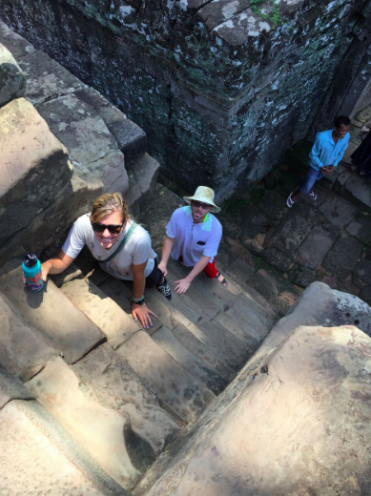 We also visited the Angkor Wat Museum, which featured an amazing panorama painting, as well as a model complex of all of the temples that have been discovered at Angkor Wat. We also saw an animated film about how ancient Cambodian people were able to create and build the temples, using primitive methods. It was mind blowing to imagine the time and effort that was put into each temple by so many people! 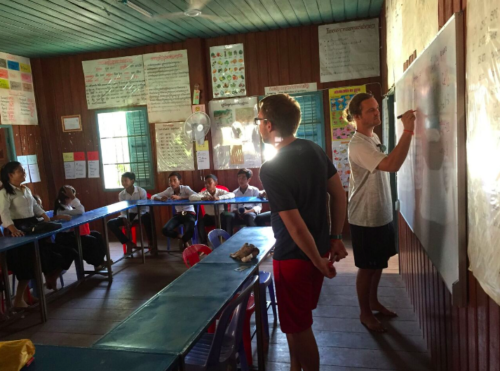 For me, the best part of the Angkor Wat trip was getting to spend time with the students from KBFC. Although the temples were beautiful and interesting, I found myself reflecting on the circumstances of the KBFC students. Through all of the difficulty, they embody hard work and resiliency. 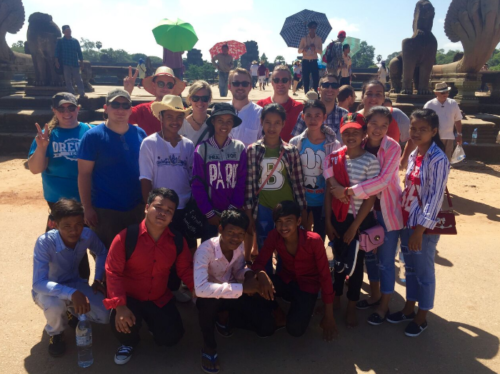 They were so excited to visit the temple complex– for many of them, they had never imagined being able to travel to visit Angkor Wat. It was very special for them to explore their county’s history. Many brought phones borrowed from a friend or family member to take photos, or spent what little money they had on buying pictures to remember their experience. They were so happy and grateful– their smiles truly helped remind me of how much I have to be grateful for.

7/27: Volunteering with the Elephant Valley Project. This past week, the 8 of us adventurers made a 6 hour trip to the province of Mondulkiri.  We arrived at the Hefalump cafe, where we met the staff and squeezed in our last 10 minutes of wifi.  Following that, we were driven out to the Elephant Valley Project, a non-profit organization that we would be volunteering at for the next few days. The first day, the group made the slippery, tiring hike into Heaven valley to see 4 elephants.  Jack, the founder of Elephant Valley, gave us the background of the stories of the elephants and some general elephant facts. Then there was a 2 hour siesta between 12-2 where everyone could recuperate before another hike to see 2 more elephants.  Nights were spent hanging in the lounge, playing with the pet cat and dog, and getting to know other people from all over the world who were also volunteering at the project.

Day 2 was the first round of volunteering, which to say the least, ended up being a workout.  We dug out plots to plant bamboo, took a truck ride out to hike to find the bamboo, and then came back to plant it.  That afternoon, Jack took us to meet the elephants who would potentially eat the grown bamboo in the future.  We got a run down of their stories, and we even got to meet the oldest elephant at the project named Milot, who was in her 60s. Day 3, even though almost everyone was sore, we woke up early and got at the physical activity again.  This time about 12 volunteers had to bring 50 trees up a daunting hill which consisted of 300 steps and slippery mud and moss. Using Jack’s idea, we formed an assembly line and each walked the trees a certain distance until we made it to the top about an hour and a half later.  We were rewarded in the afternoon with a swim in a waterfall, a place where the elephants also bathe in. Day 4, after saying goodbye to the elephants and all the friends we made, we left the Elephant Valley Project, with the 50 trees from the day before.  We accompanied Jack to a local village and handed off the trees to the people who needed them.  After all our hard work during the week, we all went zip lining over a waterfall.  That night we stayed in another guest house and went out for pizza for dinner.  The next morning, we made our way back to what some of us refer to as “home,”  the Billabong Hotel in Phnom Penh. The Elephant Valley was rewarding work for the following reasons: the project not only works to bring an endangered species back to their natural habitat, but it provides for surrounding villages by helping them find jobs and have basic human needs like food, clean water, and health care.  The project taught me that even contributing a small amount can be meaningful and impactful to promote a bigger cause. 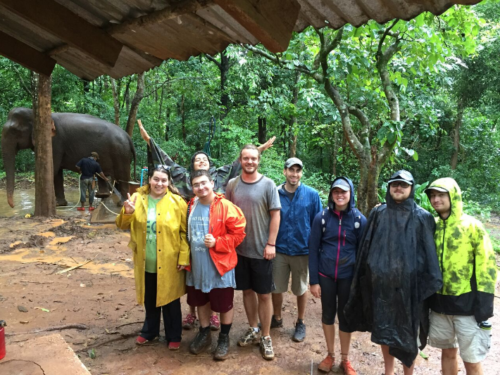 From the Elephant Valley Project, our Dragonfly travelers returned to Phnom Penh and landed back in the United States on Sunday night with the knowledge and appreciation of a greater global perspective.