We woke up to our last day in Mondulkiri. We set out to explore the province we have been living in for the past week and check out some of the cultural sites. We boarded our van early and set out to our first stop, the Bou Sra waterfall, a three stage waterfall. Local residents had shops set up on the way down to the waterfall where shopping was had. A rain shower kindly greeted us as we made it the the falls.

Next up was the Mondulkiri coffee plantation. On our way we made a stop at a local village where we were given a tour of a traditional bamboo and elephant-grass house.  The structure houses anywhere from one to three families, each about 4-6 people in size. We learned about the modern day struggles of the traditional Buonang people and their elephants.

The coffee plantation was a breath of fresh air as we all gobbled down our iced coffee’s and avocado shakes. We were given a quick tour of the coffee plants and surrounding fruit trees. After the plantation we made our final stop at a mountain holding a shrine overlooking the province of Mondulkiri where we took a group photo and appreciated the great view of Sen Monorom.

When we returned to town we did some shopping at the local marketplace and ended the day with a nice dinner. 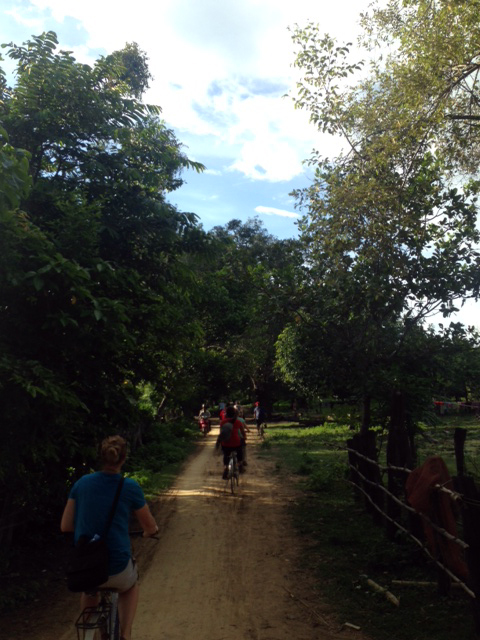 We woke up early and boarded a bus to take us to Kraiti for our home stays with CRDTours, a local community rural development team. A short 🙂 four hour ride and we arrived. We dropped off our non essentials and boarded another van for an hour ride out to the boats that were waiting to take us to our island for the next 24 hours. Another hour on the boat and we arrived.

Tensions were high as we had no idea what to expect on this island and with our home stays. We were greeted upon arrival by four families who would be taking us in for the night. We split up and went with our families to settle in to our new homes. Our first activity with them was a bike ride around the village where we saw the schools for the children, the local Buddhist monks, and spirit house. We returned to a dinner cooked by the villagers and were given a presentation on CRDT and there contributions to the village. As we retired to the different homes we were praying for rain to cool down the air. Prayers were answered and we were able to sleep just a little better, but what an experience it was.

We woke up, signed the guest books and filled out questionnaires from the families and then met up at the village center for breakfast. Our group a Khmer (Cambodian) language lesson and we all learned to count to 10,000 in Khmer. Next we boarded bicycles for a 5 km bike ride to the ferry at the end of the island. Tired and sweaty we boarded the ferry as the skies opened up. We were headed back to Kraiti where we would tour the 100 pillar Pagoda and see the Mekong turtle conservation, which are, surprisingly, in the same walled compound. Lastly we were off the find the Dolphins. We split up in three boats and off we went. Only 81 dolphins are left in the Mekong and 15 of those lived in the pool we went to.

Upon returning we cut the day short as we were all tired, wet, and and ready for a shower. We checked into the hotel and we all became humans again. Dinner and bed and Kraiti was completed by Dragonfly.